Anton Bilton recently invited The Times into Sabina Ibiza – a spiritual home, where he’s opening up about a lifetime dream finally realised.

He takes The Times writer Vassi Chamberlain on a tour of our 42-acre, 50 villa residential site in Ibiza, designed by internationally renowned architects.

Vassi says: “Anton Bilton, Entrepreneur, co-founder of the Raven Property Group and grandson of the real-estate magnate Percy Bilton, is giving me a tour of Sabina Estates. It has been a long time in the making. Fifteen years ago he and his mentor, the Aman Group founder, Adrian Zecha, searched Croatia for the right plot, but didn’t find it. The idea for a European private villa community with a clubhouse, inspired by the models of Lyford Cay in the Bahamas and Careyes in Mexico, never left Bilton, but it wasn’t until 2015, six years after he and his family moved permanently to the Balearic island, that he realised that the perfect lot was sitting right under his nose.

Anton says: “I wanted sunset, sea and great views, and behold, on my doorstep, this place came up.”

Vassi continues: “The trim and elegant 55-year-old sounds just like he did at 19 when we met: obsessed by the meaning of life and the secrets of the universe. You would never guess that this optimist and dreamer, who talks about ‘the abundance of life’ and doesn’t display sharp edges or cynicism, is a businessman whose worth The Sunday Times Rich List estimates at £126 million. Forbes magazine anointed him a king of Russian real estate thanks to his early acquisition of industrial warehouses in the country.

“It is these character traits – a mix of James Dyson, Richard Branson and Willy Wonka – that informed the building and spirit of Sabina, a place where Bilton says like-minded people can coexist in laid-back luxury with their families.”

The heart of Sabina is the open-air clubhouse with its vast pool. The site also features a restaurant, nightclub, spa, tennis courts, 24-hour concierge, bowling alley, kids’ club, meeting and screening rooms, wine cellar and mini-amphitheater. “His (Anton’s) audience will be what die hard locals refer to as ‘new Ibiza’: in other words, the nomadic global mega-rich who visit the island every summer. Bilton refutes the tag, and instead describes Ibiza, which he first visited when he was 19, as “a cauldron of international creatives,” says Vassi.

Individuality, rather than homogeneity

“It was a blend of the poetic and the practical – the lack of historical housing stock on Ibiza – that inspired Anton to build Sabina,” says Vassi. “I kept meeting buyers who would drive around all day and couldn’t find anything suitable built with planning permission,” says Anton.

When the perfect plot of land came up on the west coast in Cala Tarida for 177 villas Anton says he pounced. “I thought, Let’s build 50 big villas instead. If we get the villa community concept and facilities right, no one will ever want to leave. We were feeding into demand,” says Anton.

Sabina has 18, including the Italian Matteo Thun, the Brazilian Marcio Kogan and the American Rick Joy. “Individuality, rather than homogeneity, is the thing,” Bilton says.

Homes linked by modernism and nature

“While each home is different – prices are from €4.5 million to upwards of €20 million, making Sabina the most expensive group of villas on the island – modernism and a connection to nature, Anton says, are what links them.

Vassi explains how the concept evolved: “His idea of community living came from traveling with his wife, Lisa B, the American former model, singer and businesswoman, and their three boys, as well as two grown-up children from his first marriage. He recalls going to Careyes, where people he had never met invited him to dinner.” Vassi says Anton explains: “I remember thinking, ‘How crazy is this?’ But I overcame my typical British disdain and met all these mad groovy people. I want to be sitting here in 30 years’ time with three other 85-year-olds I didn’t know before, but who have since become my closest friends.”

A place for reflection 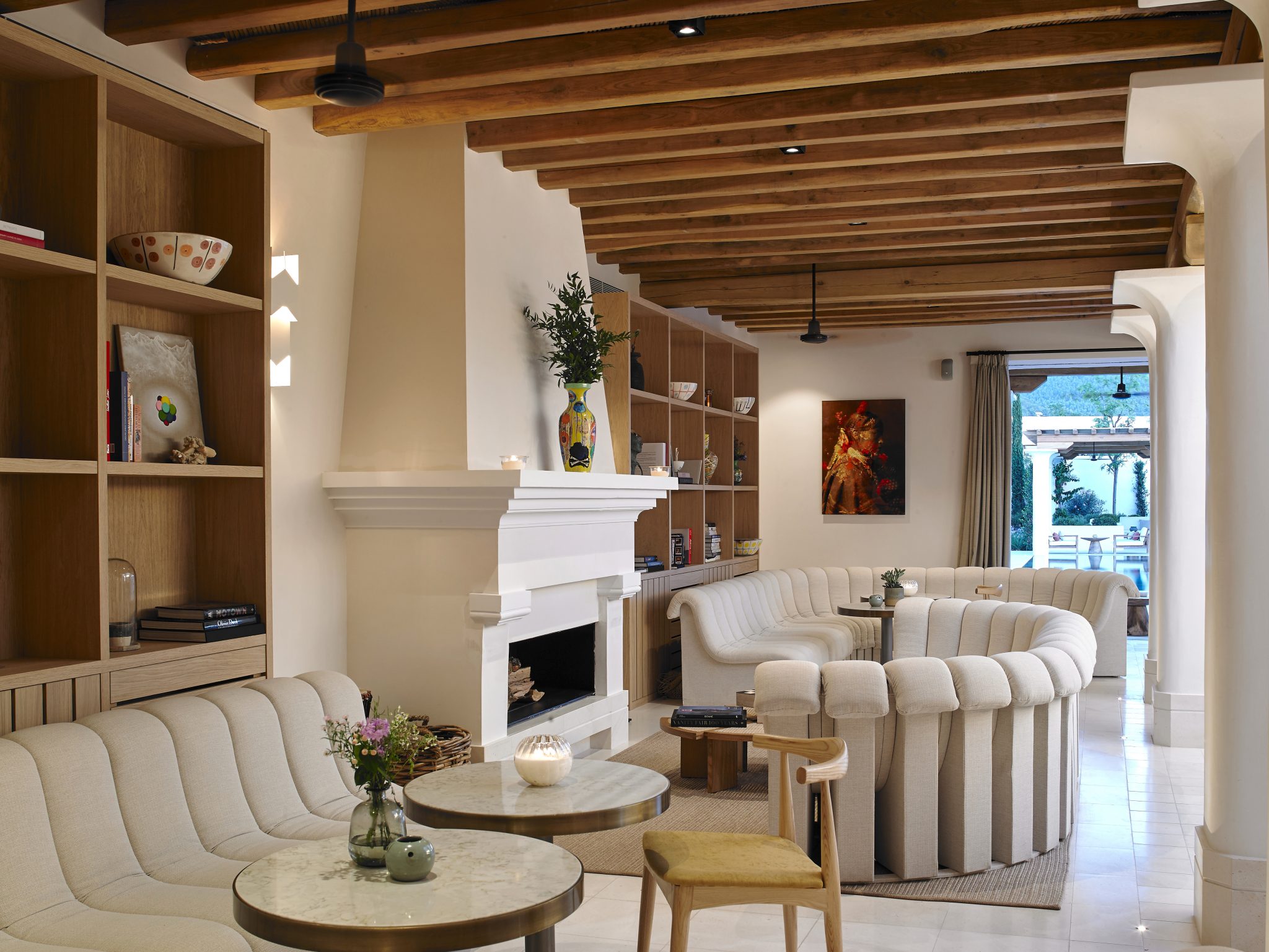 Vassi explains that the main restaurant, which will open to non-members at night, will be run by the fabled Ibiza trattoria La Paloma, and the design of the clubhouse was inspired by the Phoenician princess Europa. With Anton adding: “I have just hosted my son’s coming of age in the temple with a Native American-style ceremony, but it will also be a place for people to get married, renew their vows, a place for reflection.”

Vassi concludes: “Later that day we return to Sabina for a birthday celebration. The sun is setting; a hippy ceremony is taking place at the temple, with hypnotic sounds and dancing around a blazing pit. A topless female acrobat is performing above the pool, fire-eaters dance on the roof and guests wander with cocktails. Everyone is slightly in awe. It’s a long way from Bilton’s Russian warehousing empire, but it’s a coalescence of what he has worked towards all his life. I don’t think he will mind me calling it his ‘spiritual capitalism.”